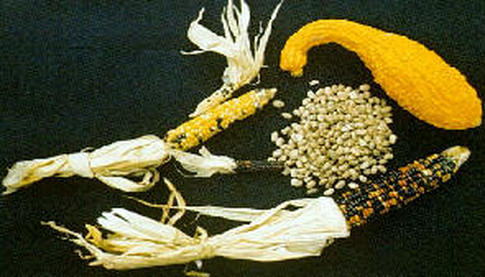 1.    A date was not given on the website but it was probably during the colonial period.
2.    Accessed on March 8, 2013. Eastern Woodland Indians, http://portfolio.educ.kent.edu/mcclellandr/zackthezipper/easternwoodland.htm.
3.    The picture shows the various types of corn that the Iroquois would eat.
4.    The Iroquois found their food by hunting, fishing, and gathering berries, fruits, and nuts. They also cleared the land and planted large fields of corn, beans, and squash which Native Americans called “the three sisters.”  During the winter months, trees were tapped to get maple sugar. The liquid was put in wooden troughs and stirred day and night over a fire. After a long time the liquid syrup changed into sugar.
5.    The Iroquois lived in the Northeast area in the state of New York and had fields of corn and other crops.
6.    This information is significant because it helps us to understand the foods that were eaten by the Iroquois Nation and how this diet enabled them to survive during the colonial times.