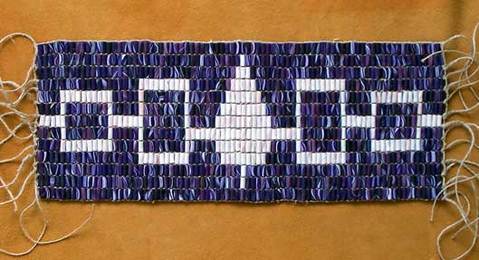 1.     This artifact date back to the early 1700’s.
2.     Maracle, Ken. “The Hiawatha Wampum Belt,” Cayuga, 2006, Retrieved on March 6, 2013 from:  http://www.iroquoismuseum.org/ve3.htm.
3.     This is a picture of the Hiawatha Wampum Belt
4.     The Wampum Belt symbolized the founding of the Iroquois Confederacy.  Each square represents an Iroquois Nation. On the far right is the Mohawk Nation - The Keepers of the Eastern Door. On the far left is the Seneca Nation - The Keepers of the Western Door.  The two younger brothers, the Oneida and Cayuga are in between. The central fire, represented by a tree is the Onondaga Nation. The  Tuscarora Nation joined the Iroquois Confederacy in the early 1700's so they are not represented in the earlier Hiawatha belt.
5.    The Iroquois Indians made the belt.
6.    The Wampum belt was made from 6574 Wampum beads - 38 rows by 173 rows, and has 892 white and 5682 purple beads.
7.    The Wampum was used to mark exchanges for engagement, marriage, and betrothal agreements, as well as for ceremony and condolence ceremonies
8.     The Hiawatha Wampum Belt Woven belts are an example of how the Iroquois used the belt as currency to trade with the colonist in colonial North America.