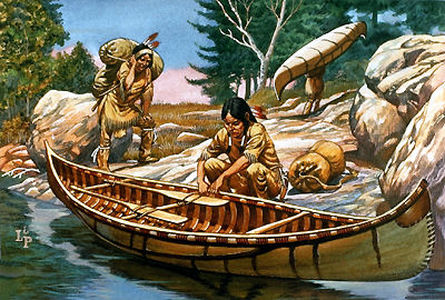 1.      A date was not given on the website but was probably between 1600 and 1700’s.
2.     Accessed on March 7, 2013 from:  http://mrneely.wikispaces.com/The+Iroquois+Tribe
3.     This is a picture of the men from the Iroquois Tribe preparing to travel by canoe.
4.     The Iroquois tribe used the canoe as a means of transportation to get from one place to the other.  A canoe made from a    hollowed out tree was used to fish in the lakes and streams nearby. Nets and traps were also used to catch fish.
5.     The Iroquois preferred to travel by land but they also use the canoe for getting around the rivers.
6.     The picture shows one of the many types of transportation that the Iroquois Indians used to get around in their land.  The Iroquois tribes had no horses or animals to take them to their destination.